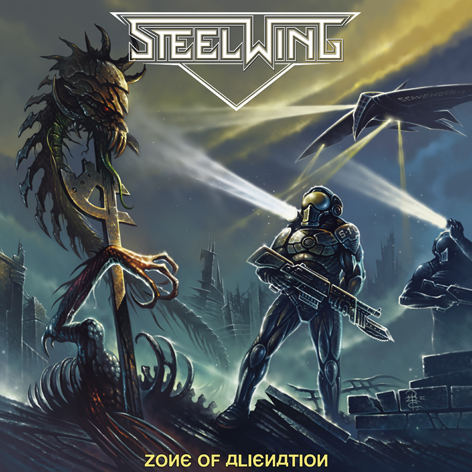 “Breathless”, a brand new song from Swedish metallers STEELWING, can be streamed in the YouTube below. The track comes off the band’s second album, “Zone Of Alienation”, which is due later this month via NoiseArt Records. The CD was helmed by producer Rikard Löfgren, who had previously worked with DEATHSTARS, MAMAKIN, ENFORCER and VOMITORY, among others.

According to a press release, “Zone Of Alienation” is a semi-concept album set in a not-so-distant future where the remnants of mankind have fled into outer space. Following the eradication of the Earth after religious wars have gone nuclear, they set out to find new worlds to colonize.

The “Zone Of Alienation” cover artwork was created by Dimitar Nikolov and is an eerie depiction of heavily armed space pioneers setting foot on a hostile planet.

The album will be made available as a limited-edition digipack with a bonus track.

STEELWING will embark on a tour in January with their fellow Swedes GRAND MAGUS and BULLET.