ALL RONNIE, ALL DAY #2: REVIEW “HEAVEN AND HELL – THE DEVIL YOU KNOW” 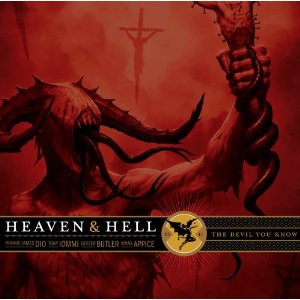 Being the final full length studio work of Ronnie James Dio’s career and the one year anniversary of his devastating death I felt it approporiate to finally write a review of Heaven and Hell’s The Devil You Know.

Released over two years ago now (April 28, 2009), most of this work has been largely ignored or already forgotten by anyone other than the most stalwart Ronnie James/Black Sabbath fans. Shamefully so, I believe.

This album is a fine collection of songs from three of the most influential metal maestros ever. Ronnie James Dio is the mightiest vocalist in metal history as well as being a visionary songwriter. Tony Iommi invented the heavy metal riff and sound with his guitar playing. Geezer Butler wrote and co-wrote some of the greatest and most revered metal songs in history (Paranoid, War Pigs, Iron Man, Sweet Leaf….) and adding veteran skin crusher Vinny Appice results a mighty heavy mix and a couple new classics.

The Devil You Know is a strong effort and a worthy addition to the Black Sabbath/Heaven and Hell catalog with standout songs Bible Black, Neverwhere, and the re-inventive riffing of my favorite track on this disc, Fear. Ronnie still had those full on metal pipes too and you can hear it throughout.

Anyone who is a Black Sabbath or Ronnie James Dio fan should immediately buy this, rip it open on the way to the car, crank it up and drive around town until they’ve fully indoctrinated their hometown in the joys of this metal melding in it’s final incarnation. While The Devil You Know is not up to the standards of one of the all-time masterpieces (the first Black Sabbath album with RJD, Heaven and Hell) it is up to the task of matching all of their other work with Mr. Dio. Any self respecting metalhead should own this and make it part of his annual May 16th music mix.